Earned value analysis is a set of simple .calculations that separates budget performance from work performance so you can manage costs and work in the midst of the chaos.

Budgeted Cost of Work Scheduled BCWS is the cost that would have been incurred for a task from the beginning of the project until the status date if the task were incurring the scheduled costs. BCWS is the baseline budget. Budgeted Cost of Work Performed BCWP is the cost that sh~uld have been incurred between the begin ning of the project and the status date, based on the actual work performed. BCWP is the actual hours calculated at the baseline cost, and is also called earned value.

Actual Cost of Work Performed ACWP is the actual cost incurred for the task between the beginning of the project and the status date. ACWP is actual costs for the task. BCWS and BCWP are both calculated from the project baseline, so you must save a baseline before you can do earned value analysis. There’s another way to describe these three fundamental values. It’s overly simplistic, but clearly underlines the differences between the three:

To see how the three values are calculated, let’s look at a ·task that ha~ 80 hours of work over 10 days duration in the project baseline. The resource assigned to the task in the baseline costs $12.50 an hour, so each day of work was budgeted to cost $100. The project manager had to assign a different resource that costs $16 per hour.

The three values are used to calculate two variances and two ratios, which is where it really gets interesting. Schedule variance (SV) compares BCWS to BCWP (budgeted costs for scheduled and actual work) and isolates the budget difference attributable solely to
the difference between scheduled work and actual work. Cost variance (CV) compares BCWP and ACWP (budgeted arid actual costs for actual work) to isolate the budget difference solely attributable to the difference in resource costs.
SV = BCWP-BCWS
CV = BCWP-ACWP

The variance figures reflect the budget for the task, so it’s hard to compare the results from one task to another task with a very different workload or hourly cost. Avariances of $50 halfway though a one-day task may be worth noticing. Avariances of $50 near the
end of a yearlong task is chicken feed, peanuts, or some other cheap livestock food.

The two indices use division instead of multiplication, so you can appropriate compare one task to another or one project to another project at the same point in a schedule.

The Cost Performance Index (CPI) (not to be confused with the Consumer Price Index,. which is dearly not well managed) is the ratio of baseline budget costs to the actual costs incurred for the task

Project 2000 also uses the actual costs and work to estimate the financial future of your project. These estimates aren’t strictly part of earned value analysis, but they answer the questions that loom just over the project horizon:
• Estimate at Completion (EAC) includes fixed costs, actual costs, plus the remaining costs for a task. Note that this estimate is the estimate If the remainder of a task’s work is completed as budgeted.
• Baseline Cost, or Budget at Completion (BAC)is as described: fixed costs plus baseline resource costs. BAC includes overtime hours at the overtime rate and standard hours at the standard rate.
• Variance at Completion (VAC) is the difference between BAC and EAC
(VAC= BAC- BC).

TOW the good news: you’re working on a computer with a first-class software package, so you don’t have to calculate any of these fundamental values, variances, ratios, or estimates. To see all the earned value variances and cost estimates, display the Earned Value table in any task view. To display earned value columns in a Gantt Chart: 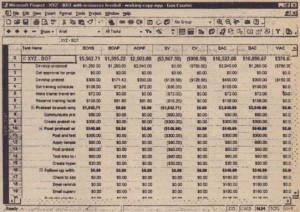