Each person who uses ‘Project Central must have an accollnt. Part of each account is the user name (to identify a specific person) and password (to authenticate that person’s identity). Accounts can be created in a couple of ways. For example, the Project Central administrator will set them up in advance. As a project manager, you can also create accounts for yourself and your team members from within Project 2000 (see “Making Project Data Available to Your Team,” as follows), assuming that the administrator has enabled that setting for you. Creating an account isn’t as simple as entering a name and password, however. T~ensure the security of your company’s sensitive project data, each account has certain permissions granted to it.

The specific data you see when you log on to Project Central depends on the role, and more specifically the categories, to which your account has been assigned. The assigned role and categories are collectively referred to as permissions, and the Project Centra) administrator usually configures them. For example, those assigned to the Team Member category can usually do the following:

It’s conceivable, even Iike~yin many companies, that a person could be an assigned resource (team member) on one project and the project manager on another. As a team member, you can view your tasks, your email messages, and certain views of the project data On Projects X, Y,and Z. As the manager of Project Q, you can see all that, phis you can use the status reports provided by team members toupdate Project Q. Naturally, as Project Manager, you have access to all views and reports for the project you’re managing
from within the Project file.

In theory, anyone with an account and appropriate permissions can see data in Project Central. However, if you as project manager haven’t updated the project file to the Web server or sent any workgroup messages since the Project Central accounts were set up, users won:t see much when they log on to the Home Page. They’ll have no mail messages and no task entries in their tirnesheets, They won’t even be able to see the name of the project unless you configured it for Project Central. So, there are really three general issues controlling what users see: account permissions, Project 2000 file settings, and workgroup messages sent.

Updating a Project to the Web Server

Some administrators prefer to create user accounts and permissions as part of the Project. Central setup and configuration. However, the administrator can enable a setting that allows project managers to create accounts for themselves and their team members as they post and update their project file to the Web server. To post a project file, open it in Project 2000, and then follow these steps 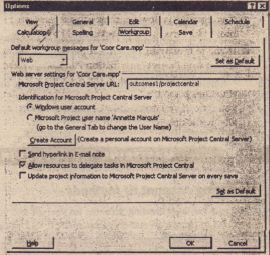 Updating a Project to the Web Server

2. Choose Web as the method of communication you want to use for Workgroup messages.
3. Type the URL for Project Central in the Microsoft Project Central URL field.
4. Choose an identification method (see sidebar that follows these steps).
5. Optional! Click Create Account, but only if you don’t currently have an account only if you want to work in Project Central (customizing the Home Page or creating views for your team members to see, for instance) before you send a workgroup message
6. Enable the Send Hyperlink in E-mail Note feature if you want team members to receive a regular email message, with the URLfor Project Central, each time you send workgroup messages. This email is intended to serve as a reminder for resources to log-on to Project Central and retrieve messages. If they’re already doing that on a regular enough basis, .leave the feature disabled.
7. If you want to allow your resources to delegate tasks to other resources in this project file, enable that checkbox.
8. If you’re modifying the Project 2000 file frequently, it’s a good idea to enable the Update Project Information checkbox. Project Central displays data from your Project 2000 file, as of the last time you synchronized with the server. If timelines get shifted due to task slippage, the new dates aren’t reflected until you sync. If you don’t update automatically upon saving, you can do it manually by clicking Tools> Workgroup> Update Project to Web Server

Project Central display the NT user name in the From field. With this option, you have the advantage of being able to use Windows NT security features. The Microsoft Project User Name method (for Microsoft Project Server Central authentication) lets you use the name stored on the General tab of Project’s Options dialog box.

Each Project 2000 user can enter whatever name they like. In small companies, first names often suffice,which lends a personal touch to email messages. Of course, standards must be established, or else you’re sure to see messages from the .

As mentioned previously, the Home Page provides the starting point for your work in Project Central. Often, users blow by the Home Page with a single click-to features held on other pages. But certain options are accessible only from the Home Page (or most easily accessible from there). These options include email messages, rules features, and password settings.

• TeamAssign messages
• TeamStatus messages (not to be confused with status reports that are requested and/or created from within Project Central)
• TeamUpdate mes-sages
• Task delegation messages when other resources transfer their assignments to you
• Responses to these types of messages sent by your manager or other resources Project Managers also see the following workgroup-related messages:
• Replies to previously sent TeamAssign and T~amStatus messages
• New task requests from team members, stating that they are working on a task that is not currently part of the project file but needs to be
• Requests for task delegation from team members when they have to transfer their own task assignments to another resource

You can open an individual message a couple different ways. Click the Open Messages link to open the selected. message (the one the square black indicator in the far-left column). Or, you can click the link in the Subject column of the message you want to view,

Each message type requires a different set of steps to respond. Fortunately, Project Central makes it easy because most messages contain detailed instructions that even your least experienced users can follow. Let’s look at anexample. We’ll open the TeamAssign message from team member Karla Browning’s Inbox (shown in Figure 16.3), 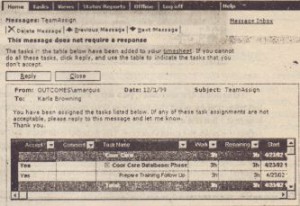 The instructions for this message appear near the top of the page, below the Delete, ‘ext, and Previous message links, One thing that jumps out right away is the banner that instructs the team member that This Message Does Not Require a Response. Although your less-conscientious resources might he~d directly from the banner to the Delete Message button, hopefully, most will continue reading. Below the banner, Project Central displays text that explains the following

instructs the team member that This Message Does Not Require a Response. Although your less-conscientious resources might he~d directly from the banner to the Delete Message button, hopefully, most will continue reading. Below the banner, Project Central displays text that explains the following

• Events that have occurred as a result of the email (in this case, tasks were added to the resource’s timesheet)
• What the resource should do if this action is unacceptable (click Reply and indicate which tasks cannot be accepted)

At this point, the user can type a reply message, as shown previously. (Look for an insertion point toward the middle of your message window above the Original Message text.) But the most important thing the user must do is to change the table to reflect the tasks she cannot accept. The Accept? field has a Yes/No drop-down list that defaults to Yes. Changing the Yesto a No declines the task assignment after the message is sent. After the table is updated, the user clicks Send. The message closes and the original TeamAssign message (to which she was replying: is deleted from her Inbox.

Many of the actions required for responding to Project Central messages are similar. Table 16.1 summarizes what team members should do to reply to different types of mail.

Posted on November 25, 2015 in Team Project Management With Project Central 2000