If you can add code to a Project 2000 file, so can the people who write viruses. Viruses are self-replicating programs. ~en you open a file.that contains a virus, the virus copies its code into the application default template, effectively becoming a global virus. From that point forward, every project you save in the application will be infected, which means that every file you give to someone else on a disk or via the Internet will also contain the virus-not the best way to improve your popularity at work or home.

Macro viruses are a recent phenomenon because powerful application programming languages are relatively new. If an application isn’t programmable, there’s no way to create a macro; application programming languages that can create or save files open the door for code that can replicate itself. Put the two together, and you have an environment suitable for macro viruses. The first macro virus was created in 1994 for demonstration purposes. Within a year, macro viruses created for other purposes were found “in the wild.” Early macro viruses were designed to embarrass and were, in the world of viruses, relatively benign. They’d ship humorous or nasty messages to  of your Outlook contacts, or change the header or footer in a file to something you wouldn’t want to distribute at a meeting.

The damage a virus is designed to do is referred to as its payload. Some recent macro viruses have a heftier payload. Viruses that modify the Windows registry, for example, or delete some or all folders from the default drive make us yearn for those good old day’ a few years ago when the typical macro virus payload was repeated display of a happy birthday message for someone you’d never heard of.

Project 2000 clothesline include virus-detection software, but you should install some unless you never receive email or files from another computer by disk, network, or Internet connection. (That means you ‘won’t be using Project 2000’s work group or Project Central features, right?) Project does, however, scan every project file you open to see whether it Contains macros. When it finds macros in a file, the response depends on the security settings on your computer and the documentation provided with the macro.

Windows 98 and NT support digital certificates (also called digital signatures) issued by companies like Veri sign for use by software developers and individuals to certify the authenticity of the contents of a file, program, or email message. Although anyone can obtain a digital certificate, a certain amount of information (such as a credit card number and verifiable email address) changes hands durin~ the application process. The company or organization issuing the certificate tracks the certificates, and can contact the certificate owner if software or files with their certificate include viruses.

It never hurts to choose Disable Macros. Disabling the macros gives you an opportunity to look at them in the Visual Basic Editor without risk of infection. After disabling macros, you can look at the macros in the Visual Basic Editor (see Chapter Check the macro’s description (refer to Figure 22.1) and see whether it was written by you or a coworker. If you know that the file is from a trusted source (with good virus detection software on their system); or if you’ve just examined the macros, judged

When you open a file with a digital signature that’s not already on your list of trusted sources, Project displays this dialog box: 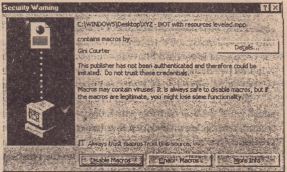 The dialog box shows the owner-sf-the certificate, which may be enough, particularly if the. owner is a coworker or team member. If you feel you need more information, click the Details button to view certificate details. This lets you see whether the certificate comes.from the person’s employer or is a personal ID obtained from a digital signature provider. Ultimately, though, you have the same choices as in the prior message box: Disable or Enable Macros

You’ve probably figured out by now that we take viruses seriously. We run virus detection software all day, every day; and scan every floppy disk and Zip disk that leaves our office. Twice. We’re computer consultants, and we can’t afford to be remembered’ as the company that gave you a virus that wiped out your hard’ drive: 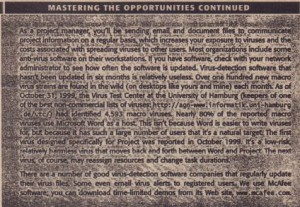 At the beginning of this chapter, we noted three reasons to create macros. When you create macros for the third reason, malinger Project easier to use for a novice, you should also think about customizing command bars. Rather than giving the administrative assistant a list of reports with instructions, you can create a report menu that prints each report he needs to create and distribute. In the next few pages, we’ll create a menu for the external reports we distribute monthly to various stakeholders. These reports Include the following:

Before we can customize the Menu bar, we need to record macros that create these reports and views. Jot down your list of periodic reports and create your macros so you can add them to the command bar. We use the name group of reports in ail our projects,
so we’ll Create global macros. If the reporting requirements vary with each of your projects, you may want to create local macros or a core set of global macros for the reports and views printed in most projects

Adding macros to command bars isn’t substantially different from the command bar customization in Right-click on any toolbar and choose Customize from the shortcut menu, or choose View > Toolbars :> Customize from the Menu bar to open the Customize dialog box. Before you start dragging and dropping, decide where You lf macros should appear on the toolbar or Menu bar. There are a few possibilities, including the following:

• You can add buttons to the standard or formatting toolbar.
• You can create a custom toolbar.

Good custom tool bars are a lot of work. We have to use text on the buttons or spend days creating icons that are meaningful enough to serve as tne primary means of identifying the action that will occur when the user clicks the button. Another approach is to have our assistant memorize the frowning face icon as the Over budget Tasks and the little telephone as the Tasks in Progress, but the goal Is to make the interface friendlier for our assistant, not introduce new memorization tasks. The Save button looks like a floppy disk.

The Print button has a printer on it. What icon will deliver that level of meaning for the Tracking Gantt? How will it differ from the Gantt Chart with Cost Table? If we need to display text for our users, we may as well use Menu . bars rather than toolbars. For example, we could either ~d the individual macros to the Macros menu (Tools> Macros) or create a menu item on the Macros menu called Reports (Tools> Macros> Reports), and then add the macros to what would be a sub-sub-sub menu.

• Create a new menu item like File and Edit. Each macro would be a separate menu command on the menu

On the Command tab of the Customize dialog box, shown in Figure 22.3, choose the New Menu option at the end of the Categories list. Drag the New Menu item Command from the right pane and drop it in place on the Menu bar

Right-click on the command to open the shortcut menu. Enter the name that should appear on the menu. Type ampersand sand (Il) tn front of the letter that serves as the shortcut key for the command (we chose D because It Isn’t used anywhere else on this level of the menu).

Right-click on the first menu item to open the shortcut menu. Change.the name from the macro name to the name you’ll want the user to see. Use the ampersand to create a shortcut key for the user

Commands on the highest level of the menu, the Menu bar, are represented only by text. Commands on the drop-down menus can have text and buttons. If you’re fer going to put these macros on a toolbar, you can start training users in advance by assigning icons and text to the menu commands. The button image set has more than twice as .

many images as the image set in Office 2000. To display an Image; right<Uc~ on the menu command to open the shortcut menu, and choose Change Button Image. Project automatically changes the display setting on the shortcut menu to Image and Text.

Change the name, display, and button Image settings for the remaining menu items. Drag and drop menu items to rearrange them if you want. When you are finished, click Close to close the Customize dialog box. Here’s what our finished Distribute menu loo~ like:

Macros and command bars are just the tip of Project’s customization iceberg. In the next chapter, you’ll learn how to add customized Project fields and add custom fields to the standard input forms so you can collect different kinds of cost, task, and resource Information. lt’s new It’s a lot like Titanic, but without Kate, Leonardo, the boat, and the great soundtrack (and hopefully, the “crash” at the end),