Assigning a Value to a Variable Project Management Help

To assign a value to a variable, use an equal sign after the variablename, followed by the value, The following statement assigns the value SS to the variable i ntDaysExpi red:

VBA provides a full complement of operators-items used for comparing. combining, and otherwise working with values. The operators fall into four categories:

Table 24.2 lists the operators in their categories, with brief examples of each and comments on the operators that are not self-explanatory. 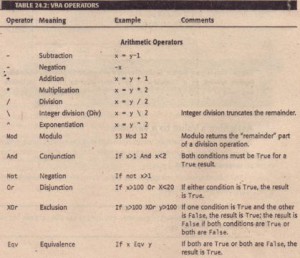 In this section, we’ll briefly discuss some of the programming structures that you can use in Visual Basic code. These structures fall into three major categories:

Sequential structures are the simplest structures. The procedure executes each command, in order, until it hits the End Sub command. The sample statements that have appeared in this chapter and the macros we created in Chapter 22 used sequential structure

VBAsupports three types of If statements:

The If/Then statement is the simplest If statement, and is the same statement used in Excel, Access, and a variety of programming languages.

Here’s the syntax of the If/Then statement:

If condition Then
(commands executed when condition – True)
End If

With the If /Then/Else statement, you can execute

one of two sections of code, depending on the condition. The syntax is as follows:

Select Case is much like If /Then …Else If /Else, and is used to execute one or more commands based on one value. Here’s the syntax for Select Case:

‘For counter – start To end [optional Step step value
(comm, ands to be executed if counter <. end)
Next counter
The counter is a numeric variable. When VBhits the For line, it checks the value of the counter and compares it to the End value:

• If the current value of counter is less than or equal to the end value, VBA executes the statements in the loop. When it hits the Next line, it increments the counter and loops back to the For command.
• If the current value of counter’ is more than the end value, VBA skips to the command line following the Next command. By default, the counter value is Incremented by 1. To-have ‘VB increment by a different positive or negative value, include the optional Step keyword, followed by the increment you want to use:

If the Step increment is a negative number, VBsubtracts the increment from the -counter and continues executing the commands in the loop until the counter value is less than the end value:

The Do Until structure is the opposite of the Do While structure.

With Do Until, commands in ,the loop are executed until the condition is met: