Cost Application and a Linked Expenses application. Project Is not an accounting program, so it doesn’t have built-in support for job costing and estimating for external customers. The rate and fixed cost information entered in a Project 2000 project file can reflect our internal cost for a project or the prices that we’d charge to customers, but not both.

The Charged Cost application could also be used for testing different scenarios when planning a project: “Should we build our new line of widgets in our Kalamazoo plant or in our Springfield plant.

Every application that can be automated with Visual Basic has an object model. The object model is a road map to the objects in the application that have been exposed that can be used in VB automation. By now, you should understand the Project object model  you have been reading about it and working with it for the last The structure of the Project Object model mirrors the structure of Yo’low, for example, that before you can create a task, you need to have a project opened. Likewise, in VByou will need a Project object before you can create a Task object. There’s a term for the relationship between the two: the Project object is the parent object for the Task Object.

Project 2000 exposes many more objects than prior versions of Project. Exposed objects can be used in a VBA module attached to a project document or called from other programs such as Excel, Word, and Visual Basic to automate actions within Project. An application’s ActiveX object model is your reference guide to the objects that you can use in programming code. The ActiveX object model is hierarchical in structure like the Windows folder structure. For example, the Project Object contains collections of task objects and resource objects because a project file can contain tasks and resources.

The Project Object is the parent object of both the Task Object and the Resource Object. Figure 25.1 details the hierarchy of the Project object model. 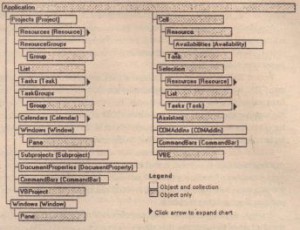 We’re assuming that you’re fairly familiar with the terminology that Project 2000 uses to refer to items and fields. If you think of the way that you normally use’ the application, the object model should be easy to understand. For example, a project has a number of tasks. On a task’s dialog box, there is a tab where a number of resources have been assigned to the task and a tab that lists the task’s predecessors (tasks that the task depends on). Here’s how these relationships are reflected in the Project object model:

As we noted  the hard part about automating Project 2000 or any other application isn’t understanding Visual Basic-it’s understanding the application. In the next section, we’ll examine the objects in the Project object model and their events in detail. As you read through this section, you’ll find that the object. model directly reflects the way Project 2000 operates .